Why Belize? Why Right Now?

There are many good answers to this question. The best of these answers was revealed at The Great Reveal Celebration and is included at the end of this article.

But first the runners up: 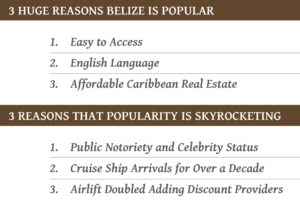 Let me back up a minute and tell a short story about my first encounter with Belize. In 1993, I was 29-years-old. I visited Belize for the first time with a long-time friend of mine, Joel Nagel. A year later, we purchased condos for vacation and rental when we weren’t there. They rented well to divers and fishermen.

Back then, the island was a niche market. The streets in town were sand. You could walk into any restaurant and get a table without a wait. The vibe was “Key West 50 years ago.”

Savvy investors are taking note. The chart below tells the “path of progress” story and how it relates to return on investment.

Countries are placed along the “Popularity Curve” by how popular they are. It’s totally subjective, of course, but please see if you agree.

At the high end you see the Pacific Costa Rica. That region enjoys great popularity among honeymooners and vacationers. Think Guanacaste with a JW Marriott.   Investors earn cash flow in these markets but a higher price of entry to buy.

Conversely, Nicaragua is at an earlier stage on the curve. Investments there have great potential for appreciation as the market matures, as well as increasing cash flow as they become more popular.

Now, go back to the chart and look toward the middle of the Curve. There sits Belize and more specifically, Ambergris Caye, a 26-mile-long island in the north.

This tiny island generates 70% of all tourism revenue for the country. It is in the powerful position of having great room for appreciation, while also providing strong present-day cash flow.

Belize is maturing quickly for a variety of reasons. And importantly, there’s also an acceleration of this maturity happening right now. The 3 main reasons Belize’s popularity is skyrocketing are:

12 years ago, cruise ships started arriving to Belize. This put 2,000+ people per ship, per day, into the country. Many passengers love the glimpse they have and decide to come back for a week or two later on. And when they do, they stay in hotels. This is happening right now.

The second reason the popularity of Belize is skyrocketing is that airlift doubled in the past three years with 101 arrivals now per week. United, American, and Delta have been flying to Belize for decades. In 2015, Southwest ushered in low fares and serious competition. WestJet inaugurated its first flight Canada to Belize in 2016 and is opening more routes right now.

Not only are they visiting, but the rich and famous are investing too. Francis Ford Coppola operates two resorts in the country today. Leonardo DiCaprio recently purchased an island to build an exclusive $1000+ per night resort. Even Bill Gates was looking for property on a recent visit to the island.

Supply and demand are out of balance, while airlift has more than doubled in the past 3 years, the number of rooms for traditional tourists has not.

KEY POINT: The change of traveller type is critical. Boutique markets allow for quirky resorts and limited service hotels to thrive. But mainstream travellers want something different. They want predictability, certainty, and known standards. When other things are equal, they will book the known entity.

Hotel rooms, and specifically the lack of branded hotel rooms on Ambergris Caye are at a crucial point in this demand / scarcity continuum.

Owning hard assets is critical for any portfolio…but not just any hard asset. Scarcity is important. Something rare is always going to outperform something common.

Imagine if you would have purchased real estate in Costa Rica 15 years ago. Imagine how smart you’d feel and how you’d be glad you had the foresight to do something that put you in the right place at the right time. Now is another chance. Enjoy some 20/20 hindsight.

Location is the #1 trait of prime real estate. In Belize, it’s Ambergris Caye. Now throw in the dream development team and intensive long-range planning. Add in the skyrocketing popularity of the island, and you have the perfect trifecta. The new Belize Marriott® Residences Ambergris Caye Resort is the next great opportunity to get involved and own a significant piece of tourism’s bright future in Belize.

You have the opportunity to get involved at its earliest stage. Act now and be ahead of the crowds. Not many folks will have this chance to participate in this opportunity. Watch the recording of The Big Reveal and see why you may want to learn more. You’ll be glad you did.

Previous StoryHow to Have a FreedomFest Experience at Home
Next StoryCapital Research Center: Keeping America’s Think Tanks Open and Honest